This Moroccan Vegetable Tagine is the cure to cold Winter evenings. Carrots, butternut squash and chickpeas are stewed in a spicy tomato sauce that is spiked with preserved lemons and fragrant spices for a flavoursome vegetarian tagine! Plus it can easily be made vegan too!

I’m going to be honest with you, as I sit writing this I’m wearing my dressing gown, I’ve got my fluffiest socks on and a hot water bottle. And while there may have been a little bit of sunshine today (in Manchester, I know, I’m as shocked as you are) it’s still frreeeeeeezing cold. But fret not, I have the cure: this warming dish of Moroccan Vegetable Tagine.

I think one of the wonderful things about Winter is that even a dish as humble as vegetable stew (aka this tagine) can seem like something a little more luxury. Cooked slowly and crafted with love and care, it can take simple vegetables up to something really special.

This little number itself is a veggie sensation, filled with onion, butternut squash, carrot and spinach. And if you decide to throw some pomegranate seeds on top those count towards your 5-a-day too, right?

The stew base is made of passata which is spiced with coriander, cinnamon, ginger, saffron and cayenne. We’ve also got some preserved lemons and honey in there for next level flavourrrr. Perfect for these cold wintery evenings.

In any vegan or vegetarian meal, I always think it’s really important to make sure you’ve got plant-based protein in there. In this recipe, we’re getting that from the chickpeas, which are not only a great source of protein, but they’re also providing us with fibre and polyunsaturated and monounsaturated fats (the healthy fats!).

If you are eating a vegan diet particularly, it is important to get your protein from a range of different plant-based sources (known as protein combining or protein complementing) to ensure you get adequate intakes of all of the amino acids (what proteins are made of) the body requires to function. In this case, you can pair this vegetable tagine with a grain that is high in protein. I like couscous, but quinoa, buckwheat or brown rice would also work well!

Having a range of vegetables in this tagine means that as well as getting a good serving of fibre, we’re getting a range of different vitamins and minerals. From the orange veggies like the carrot and squash, we’re getting beta-carotene, which is essential for the health of our immune system, vision and skin.

This veggie tagine also includes everyone’s favourite green leafy vegetable – spinach! Spinach is a fantastic source of iron, which is important in the function of our red blood cells. It also contains a range of micronutrients including vitamin A, C and K. Don’t be shy with it!

The Ingredients for Vegetable Tagine

The vegetables – In this tagine recipe, we’re using onions, carrots and squash. Vegetable stews like this tagine are ideal for the colder months, so I chose to use seasonal ingredients that suited Autumn and Winter, such as carrots and squash. The beauty of a recipe like this is that you can adapt it for any time of year. In Spring you could use cauliflower and new potatoes. For Summer, how about aubergine and red pepper? You can use what you have available to you, making it highly versatile!

Preserved lemon – are lemons that have been preserved using a mixture of saltwater and lemon juice. Over time this softens the lemons, making the rinds edible. You will often find preserved lemons in North African food giving a citrusy, floral flavour to the recipe. But if you can’t get a hold of any, as a substitute you could use a teaspoon of lemon zest and a good pinch of salt.

The spices – the spices for this tagine are coriander, cinnamon, ginger, cayenne, saffron. This particular combination of spices gives this veggie tagine a floral and fragrant flavour and fills the kitchen with the most delicate perfume as it cooks. Feel free to adjust the amount of cayenne in the recipe to suit your tastebuds. If there are any particular spices you don’t like, you’re welcome to omit them, but it will affect the final flavour!

Passata – passata is uncooked, sieved tomato sauce that can often be found in tins or cartons at the supermarket. If you can’t get passata, you can use a tin of chopped tomatoes instead, the sauce will just be chunkier.

Honey – Honey really compliments the floral flavours in this tagine. However, if you’re sticking to a vegan diet or don’t have honey to hand any kind of sweetener would work. You could use maple syrup, agave or even a little bit of brown sugar.

Spinach – for a boost of greens we’ve added fresh spinach! Frozen spinach would also work perfectly as would kale or chopped spring greens, although these would both need a little longer to cook.

How to store vegetable tagine:

Allow the tagine to cool at room temperature for no more than 2 hours. Then transfer it to Tupperware containers and into the fridge, where it should be eaten within 3-4 days.

How to reheat vegetable tagine:

Transfer the tagine back to a saucepan or crockpot. Bring to the boil and then simmer for 5 minutes. If the mixture looks dry add a little bit of water to loosen it. Ensure the tagine is piping hot before serving. Alternatively, you could use a microwave to reheat the tagine. Add it to a microwave-safe container and microwave on full power for approximately 3 minutes, stirring halfway through. Cooking times will vary depending on the power of the microwave. Ensure the food is piping hot all the way through before serving.

How to freeze vegetable tagine:

Once the vegetable tagine has come to room temperature, add it to a freezer-safe container. Transfer it to the freezer where it can live for 3-4 months.

To defrost the tagine remove it from the freezer to the fridge to leave it to thaw. This can take up to 24 hours. Alternatively, you can use the defrost setting on your microwave.

What to serve with tagine?

What is a tagine?

The word tagine can refer to one of two things. First, the word describes an earthenware cooking pot often found in North Africa. A tagine pot consists of a wide shallow base with a conical lid and is used to create stew based dishes.

A tagine can also refer to a type of North African stew, cooked slowly with meat, vegetables and spices. All in all, it generally means TASTY.

Do you need a tagine pot to make a tagine?

You can make a tagine without a tagine pot. Instead, use a casserole pot with a lid to cook the tagine.

Why use a tagine pot?

When cooking in a tagine steam from the food rises upwards into the cone, then condenses and drips back down into the stew. This keeps the stew nice and moist. Tagine pots are also great for serving the tagine in and look particularly attractive when used as a serving dish.

How to use a tagine pot:

Tagine pots are often made of clay or ceramic and are at risk of cracking should they come into direct contact with your heat source. If you have a gas or electric stove, use a heat diffuser to diffuse the heat. This reduces the risk of cracking.

To reduce the risk of cracking further, heat the tagine pot slowly. Start on a low heat and work your way up to the desired temperature.

How to Make Moroccan Vegetable Tagine

This is my take on a classic vegetarian Moroccan stew – the tagine. Filled with chickpeas, carrot and butternut squash then flavoured with warming spices, honey and preserved lemons. Perfect for Meatless Monday and so tasty! 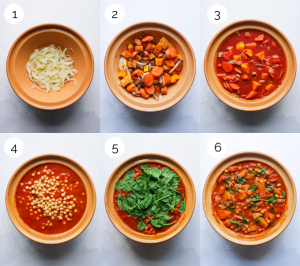 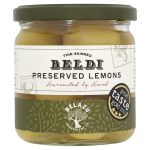